It's Wednesday and time to join Julia and the gang over at Stamping Ground. I've only been doing this for a few weeks and everyone has been so fantastic!

I can't believe another week has passed! Yikes, where has time gone? The weeks are rushing by and I'm still behind. At least this week there is something holiday-like on my desk. I've started on my Christmas Crackers and sweet boxes. I like giving them out for treats and to hold gift cards and little bits and bobs. I have some of the snapper bits for the crackers - leftovers from last year. It's nice to have crackers with things that we like inside. Lol. I do have cards to make and I'm running out of time! I have to do a birthday card before next weekend too.

Daughter wanted me to drive over to Lansing on Monday to look at an apartment. I have never driven on a highway (motorway) except on my driving test. I did not pass my test until I was 30. I probably wouldn't have learned to drive except here in America you really do need to drive. I sucked it up, took a deep breath and drove. It's about 90 miles from where we live. I plugged in my phone and listened to directions - would have been lost without them. I breathed a huge sigh when I got back home again. Lol. I did it though. All by myself. It seems a little silly but to me it was a big deal. She did apply to the apartment and has been accepted. She will be moving out not long after she gets back from Washington DC. I am happy for her, but sad that we won't get to spend much time together. The only good thing that comes out of this is when she does move all her things out I will have my craft room!!! I'm sure hubby will like not having crafting stuff all over the rest of the house.

More good news this week - my Mum's tests came back normal. About September last year my Mum was diagnosed with cancer of the esophagus. It was a shock to us all and a really rough time - especially around the holidays last year. I hated being so far away - I am in the states and Mum is in England. She got through treatment and this is her second test that came back normal. She doesn't have to go back until April. She was so lucky it was caught early as by the time a lot of people are seen with this cancer it has already spread to other places. There might be a lot of complaints about the NHS but the hospital was fantastic during all this and very quick off the mark and there were no money worries.

Anyway - I got diverted. I'm posting pictures of my desk. Hopefully next week will see more holiday things though I am getting distracted by making memory books lol. 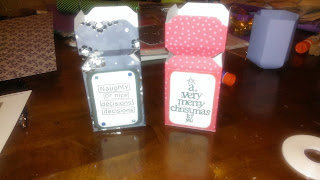 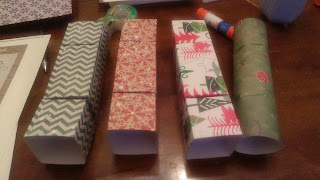 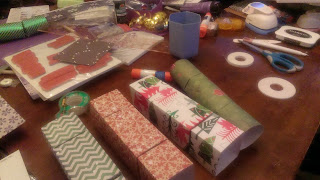 Time to go check out some of the other desks!
Posted by Sharon at 5:05:00 PM
Email ThisBlogThis!Share to TwitterShare to FacebookShare to Pinterest
Labels: Christmas Crackers, WOYWW