I don't think I've posted at all this week. I was intending to but time got away from me. I was at Jane's every day as the Estate Sale (where we sold items from her house) was Friday and Saturday. It went fairly well. I think we were pretty organised for just my mother-in-law and I doing it ourselves. The traffic was pretty steady. We didn't sell as many collectibles as I had hoped but we sold a lot of the furniture which were the bigger pieces and lots and lots of books. We had a couple of book dealers come and they bought many of the history books.

Now we have to decide what to do with the rest. I think the Christmas Village pieces will have to be donated. They aren't expensive makes and I don't think there's much of a market for them on Ebay or anything. The lighthouses I am going to try to sell on Ebay either individually or by lots. This will be my summer project along with the postcards. So, I am going to box up the lighthouses, put them in plastic boxes and store in a closet at Jane's house at least until it sells or my house has some TLC sorting done. I am giving myself a limited time as I don't want them in my house indefinitely. I have sold on Ebay before - I have even sold a couple of Jane's lighthouses recently and they did well. I also sold a couple of her postcards (one sold for $61!).

The little bits and pieces will be packed up for donation. The remainder of the books will be boxed up and MIL's cousin is going to take them to a book sale that an organisation that she is involved with has. We still have some bookcases left and I think I will put them on Facebook marketplace for a couple of weeks and if they don't go we will donate. I would really like the rooms to have only furniture on the edges so they are easily seen when the house goes up for sale.

This week the plan is to get the Christmas Village boxed up, the books and the lighthouses. The rest will have to wait. On Friday husband and I are taking a trip to visit daughter for a whole week! A whole week of doing nothing - no sorting, no housework and very limited cooking lol.

I have some catching up to do with blogs that might take me a couple of days. I am glad the sale is over. I had nightmares that nobody was going to show up. Thankfully that wasn't the case. I can relax a little and slowly things will get back to somewhat normal. 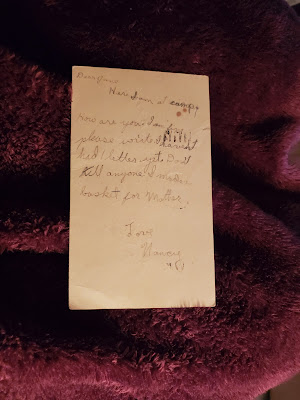 While looking through postcards I one that MIL had written Jane when they were young. It was an old postcard, no photo on the front, but it was fun to read and made me smile 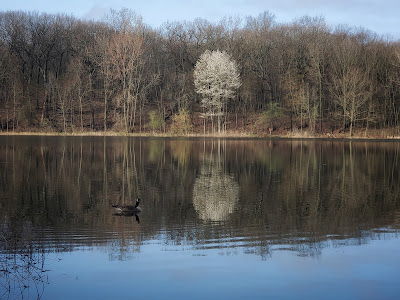 The blossom is finally blooming at the lake! A walk before going to Jane's.
125/365 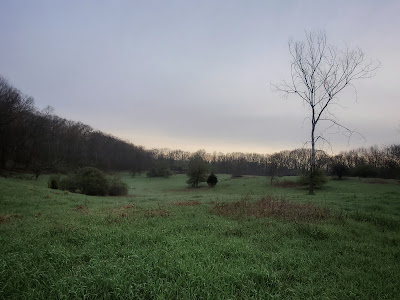 It's another photo from my morning walk. I had to miss the next two days (as the sale was starting early) so I made the most of this one. It was chilly but the grass is finally growing, and things are starting to look greener. Soon the trees will be filled with leaves!
126/365 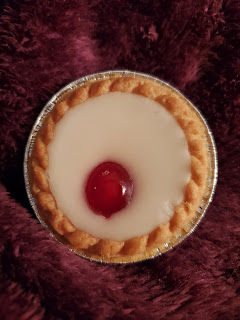 A treat at the end of a long day! I'm an introvert by nature and I find talking to strangers quite difficult and mentally draining. I managed to talk to people at the sale, but at the end of the day I was emotionally drained. It was good to sit down, put my feet up, eat one of the treats daughter had sent me and fall asleep!
127/365 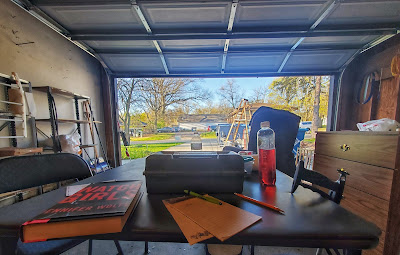 I was smiling when it was over! This was my view most of the day as I was the cash person most of the time.
Now to catch up...

Posted by Sharon at 4:59:00 PM
Email ThisBlogThis!Share to TwitterShare to FacebookShare to Pinterest