I dropped my phone again. The small crack that was on the screen has gotten bigger. I like my phone. It's a cheap-ish model, but it does what I want and I know how it works. I am not a big fan of getting a new one but I fear it's in the near future. Sigh.

As I got up early this morning and was out walking at 7.30am I decided I'd go to a clothing shop after my walk and try on some more bottoms. Sigh. Not a good experience. I could only find one (yes 1) pair in the size I needed and they weren't a great fit or a particularly nice colour. Back to square one. I am promptly running out of time and it is starting to get to me. This week is almost over and I want to get them before we go camping so I don't leave it until the week I leave as I'll be running around like crazy as it is.

Chatted with Mum today and sorted out some photos to put in her album. Last year when I was home we took a bus to Holywells Park in Ipswich and the area she grew up in including passing by the house she grew up in. I took photos and I'm sure she'll like copies of them. I had forgotten that I had taken them. Luckily when I got last year's photos developed I had organised them. 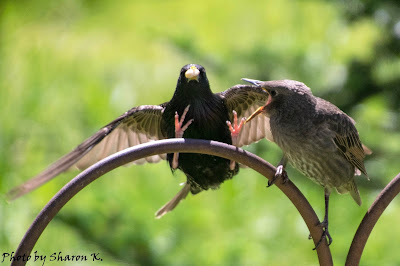 This is a photo I took of the Starling and baby in my garden yesterday. The babies are as big as the adults but they still want feeding! They are really impatient too and look to be quite violent. There are a lot of them about in my garden at the moment. On another note, mother and father sparrow have abandoned their home. Not sure if their babies flew the nest, but one morning when I woke up there was a lot of nest stuffing on the ground and Mother and Father didn't hang around much longer than that.

Hope everyone is enjoying their Wednesday and the sun is shining wherever you are. Thanks for reading my blog.
Posted by Sharon at 3:22:00 PM
Email ThisBlogThis!Share to TwitterShare to FacebookShare to Pinterest
Labels: in my garden