What a horrible weekend! It rained most of the two days - isn't that usually the way? We didn't go out walking at all on Saturday. It made for a really long day. I did have a nice Skype with Mum. Won't be long until I see her again! Sunday we did manage to get out for a little walk. We did about 2 1/2 miles and were heading back to the car when it started to rain so we got a little wet. On the way home it absolutely fell down, so I suppose we did well to finish when we did!

On our way up to the park where we were walking we decided to stop by the Rabbit River Trestle Bridge in Hamilton. It's a lovely little park. We had tried to stop by there several times in the winter, but it was apparently shut. I wanted to take a couple of photos as the challenge for this month in my A Year with my Camera Grads Group is all about architecture. 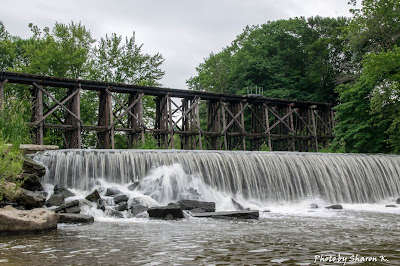 The bridge looks a little dodgy to me but apparently - from what I read - some trains still go across it!

On another good note Stubby put in another appearance in the garden. It's been weeks since we've seen him and both hubby and I were thinking something had happened to him, but he showed up again! 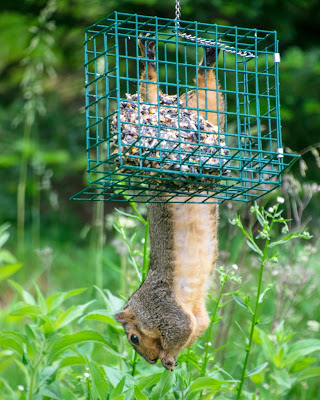 I think it's his favourite position to eat. He tries sitting up the top sometimes, but I think that, without his tail, he isn't so good at balancing.

Well, the weekend is over and another week starts. This week will be about working on that photo album and preparing for our camping trip beginning next weekend.

I hope everyone had a good weekend and the weather was better than mine!
Posted by Sharon at 10:34:00 PM
Email ThisBlogThis!Share to TwitterShare to FacebookShare to Pinterest
Labels: Hamilton Trestle Bride, Stubby