Well, I made it back. I got in at 2am Friday morning - several hours after I was due back. Yes, that means it didn't go quite to plan or as smoothly as I would have liked. The plane from England left on time and made it back to Chicago and that was about the best part of the journey. Chicago airport was a mess and that is putting it politely. I will try my hardest to avoid that airport next time. They were woefully understaffed and there were really, really long queues everywhere. I have to say that all the years I've been doing this flight that was my worst experience at an airport ever. I missed my first connection (which actually turned out to be a good thing as it was cancelled completely) and the later flight was severely delayed.  That's all I'm going to say on that subject lol.

The waiting areas around the gates were packed with people and seats were a premium. I bonded with one lady whose bags I watched while she went to the loo and she returned the favour for me. There were people who were going away for a few days and were missing time with loved family and others, like me, who were coming back from a long journey and just trying to complete the last leg of that journey. The family near me were coming back from a trip to Palestine where the teenage girls I was talking to had visited family. We were all watching our different flight information screens earnestly and were excited for one another when we saw updated flight information (only to be disappointed over and over lol). Luckily none of our flights were cancelled - though many were - and we watched as one by one the planes arrived and people got off. When we were finally able to get on our planes we waved excited goodbyes to one another. I found it quite interesting how strangers can bond over such an event.

I was really tired when I did make it home. Husband, who picked me up at the airport, had to get up for work later that morning so we basically got home and tumbled into bed. I woke about 4 hours later due to jet lag and terrible burning leg cramps - never had them so bad! I'm glad the journey is all over, but I already miss Mum. As the years pass, the goodbyes seem to get harder. It's back to our usual Skype Saturdays and chat Wednesdays. 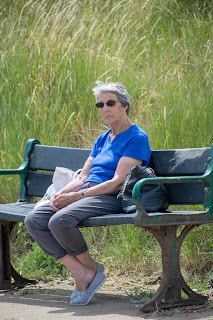 Posted by Sharon at 6:51:00 AM
Email ThisBlogThis!Share to TwitterShare to FacebookShare to Pinterest
Labels: airports, delays., strangers