A Chat and a Cross Stitch Finish

I finally got to go to my appointment to renew my licence this week. It was a little strange. Usually we just all bundle into the offices, you take a number and hope the wait isn't longer than an hour or so (though usually it is). This time it was by appointment only. There was someone on the door making sure you had an appointment. You were let inside. There were no chairs. You had to stand on the Xs and move forward as the queue moved. It actually worked better and I liked it. I was only in there for 35 minutes! It was weird this time as anyone renewing licence had to fill out paperwork and one of the questions was whether you are a citizen. As I'm not I had to show my green card and had to see a specific woman. This must be new as I have never been asked that question before. I didn't have to have an eye test - maybe because that requires sticking your eyes close up to what is like a pair of binoculars. I did see an older man having the eye test though so who knows? I'm just glad that is out of the way. My licence expired on my birthday in May (they have to be renewed every 4 years, but only every 8 years in person). There was a law enacted that people who licences expired during this period could still drive but I'm glad it's all done now!

It's been really hot the last couple of days. The air conditioners are on again. Yesterday I kept the curtains closed all day to help cut down on the heat. We went out this morning and it was already about 80F (27C) by just after 9am this morning. We didn't stay out long. I'm hoping it cools down a little tomorrow so we can at least have a little walk. I don't like walking too much when it's really hot - seems to take a lot out of you. 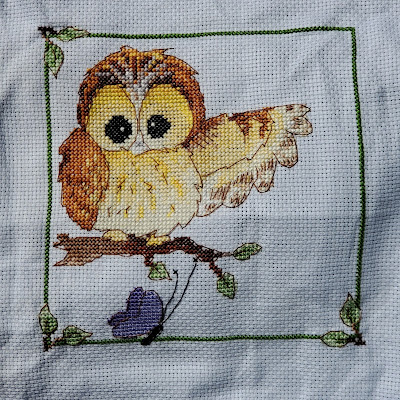 It was supposed to have some writing down the left hand side, but I didn't want that on there so left it. I got this kit at a charity shop when I was in England one year so I'm glad it's finished. I didn't mind the stitching, but I'm not a fan of backstitch and it was quite difficult to see where all those lines on the wings were supposed to go so a lot of it I just guessed lol. My next project is going to be a Ruby Wedding thing for my sister as it is her anniversary in September and Mum asked me to stitch something. I got the design on Etsy and it looks fairly simple so hopefully I'll get it done quite quickly.

Hope everyone has a good weekend!

Posted by Sharon at 11:28:00 AM
Email ThisBlogThis!Share to TwitterShare to FacebookShare to Pinterest
Labels: cross stitch