We had a lovely weekend with daughter and her dog, Shasta. We, or rather I, am now dog sitting Shasta for three days while she goes with a friend to Chicago. In theory it's really easy. Shasta is an easy going dog and she mainly just mopes when daughter is gone. She is very attached to daughter. However we have a cat, Shadow, who does not get along with Shasta. Shasta doesn't like him much either. She wants to chase after him. He is very put out. We got a pet gate to put across so Shasta couldn't go in the kitchen and basement and it does work - to a point. The cat has decided he wants in the dining room and living room and will come in and tease her. It results in Shasta having to be put back on her lead so she doesn't go after him. I'm trying to take her for lots of walks and spend time in garden or on porch.

Yesterday, before daughter left, we took Shasta to the lake so she could play in the water. She absolutely loves waves. It wasn't a very bright day, but it wasn't too bad temperature wise and the water was quite warm. 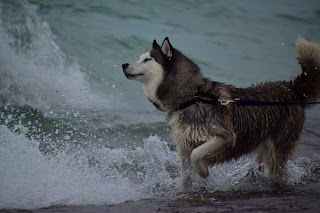 Doesn't she look absolutely happy? She was so funny. She would want to run along the shore for a little while and then jump in the waves trying to bite them. She is hilarious to watch. This dog beach is really long and easy to get to. We got there early enough that there weren't too many people about.

On Sunday all three of my 'kids' were home. It doesn't happen very often - rarely now that daughter has moved away - so I made them get together for a photo. Oldest son (left) doesn't like having his pic taken (takes after me) but I wanted to take a few to Mum when I fly over next week. Wow, that sounds really good! 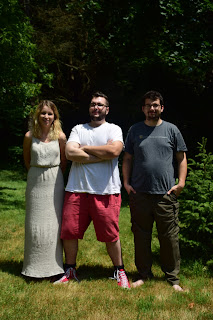 Daughter also 'persuaded' me to have my photo taken - just for her she said. 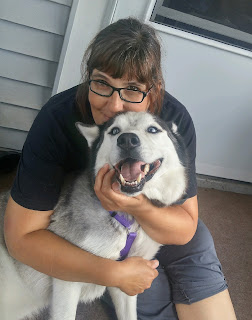 Hope everyone is enjoying the beginning of their week!
Posted by Sharon at 10:20:00 PM
Email ThisBlogThis!Share to TwitterShare to FacebookShare to Pinterest
Labels: kids, Shasta