I didn't go for a walk this morning. The last few days when I've been walking there have been a lot of black flies about. At least that's what I think they are.  They have been buzzing around my head, getting in my hair and they bite! I just needed a break from them. Also yesterday while I was out I came across a wild turkey that proceeded to try to attack me! Hubby thinks I  must have got a little close to where she had babies. She was in the bushes alongside a well groomed path. I wasn't expecting her! 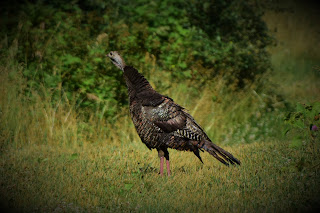 It was a really big bird! Quite scary. Who knew they could be so scary?

Anyway I did Skype with Mum. It was nice to have a chat. We're so far away from one another but it's like we're in the same room. In less than a month we will be in the same room! I fly on the 28th. After Skyping I got hubby to pull out the oven so I could clean beneath/behind it. Hanging my head in shame as I admit it being a LONG time since I did it. It was on my not-yet-written LIST so I can mentally cross that off lol.

We'll be going out tomorrow for a nice walk. Middle son won't be visiting as he has to work. Hope everyone has a great weekend!
Posted by Sharon at 3:21:00 PM
Email ThisBlogThis!Share to TwitterShare to FacebookShare to Pinterest
Labels: Saturday, Turkey