I'm trying to get the house ready for daughter - she will be here late Thursday night. I've been cleaning up my craft room to make space to sleep. When I get everything back out I am going to have a good old sort and organise. It wasn't quite as bad as I thought but could still use some tidying.

After a couple of days of cooler weather it is back to being hot and humid. Phew. It makes it horrible to get a lot done. We don't have central air conditioning, only window air conditioners. They aren't the greatest but they do cut down on the heat somewhat. I wish it was just a little cooler so I could do some more cooking. There are things in the freezer I'd like to get used up before I leave for my visit with Mum.

Dinner yesterday was Sausage Rolls and salad. Middle son was coming to visit so I made a big batch. Hubby took the last for work today.  I got those made before the house heated too much. I meant to take a photo but they were eaten before I remembered.

I've been going out for walks early morning trying to beat the heat. It seems other people have the same idea. The place I walk is really beautiful, a nature reserve, and filled with wildlife. Dogs are welcome but are supposed to be on a leash not just for their safety but for the safety of the wildlife. It's really sad to see so many people ignore it. There are good owners who do follow the signs and pick up after their dogs (in the majority) but there are a few that just don't seem to care. Yesterday I thought the dog running free was lost as I couldn't see the owner anywhere. They appeared a minute or so later. This morning a woman had two dogs off leash - both ran away from her and didn't come when she called. There are so many deer in the woods, also I would hate to see what would happen if the wild turkey got hold of a dog.

Anyway enough ranting - sorry just frustrated - and I'll post a photo I took. These are of the goose family I've been following since the little ones were born. Look how big they are getting! 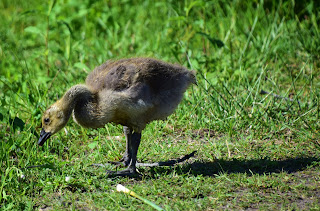 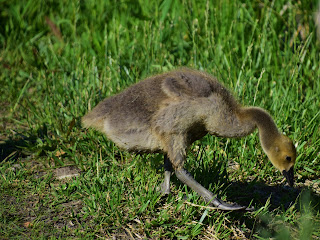 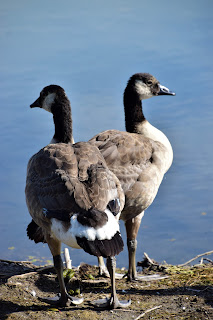 See how big they have got! It's so wonderful to watch. Hope everyone is having a lovely Tuesday.
Posted by Sharon at 4:12:00 PM
Email ThisBlogThis!Share to TwitterShare to FacebookShare to Pinterest
Labels: Geese, Walk