Daughter arrived at almost midnight on Thursday night. It was a long drive - about ten hours with stops. They had drove underneath Chicago so as to avoid going through it. I would have been REALLY nervous if she had been going that way. Cars drive crazily, darting in and out one another and not seeming to look where they are going.

We have spent a nice couple of days so far. Shadow, our cat, is far from happy. Poor thing. He does not like Shasta (husky) and Shasta doesn't like him. Luckily it is summer and he can spend the time sitting in the basement where it is cooler or the kitchen where we keep Shasta out of. Last night when I went to get Shadow after Shasta and daughter had gone to bed, he was sleeping on the treadmill in the basement! He was quite happy to get his 'spot' back for the night up in the living room. 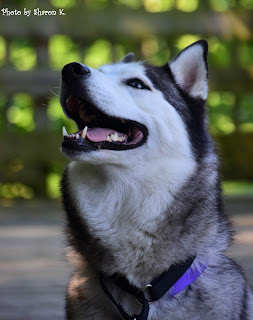 She loved being out walking today as it was a little cooler this morning and a nice breeze on the shady walk we took. We're taking her out to the dog beach tomorrow to play in the waves!

This is the knitting I was talking about. Now that I'm done a couple of inches it is looking better. I think maybe I'm a little hard on myself regarding these patterns and perhaps I should just give it a chance before getting frustrated that it looks too loose. I really like the colours. The pattern says it is an 8 hour pattern - it's going to take me more like 8 weeks! I'm not knitting very often as in the hot weather I am finding it too hot! Maybe I'll take this project to England with me. 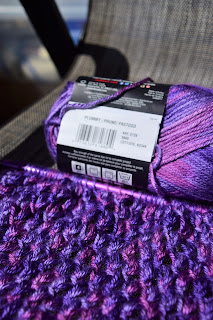 I hope everyone is having a lovely weekend with lots of sunshine.