The Sun! The Sun!

The sun has FINALLY been shining and I've been making the most of it. The temps are a little warmer (still below freezing) but I'm been getting out taking advantage of the break in the snow and cloud. It's really surprising how a little sunshine can make you feel a lot better. The other day the sky was so blue that sitting indoors it was a little hard to fathom that it was still only in the single digit F (well below minus C).

The birds were out and about when I went for a walk down at Asylum Lake. 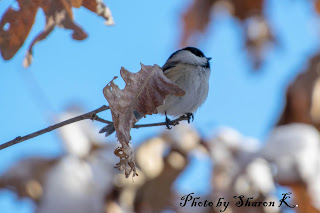 The lake is still well frozen and snow covered. 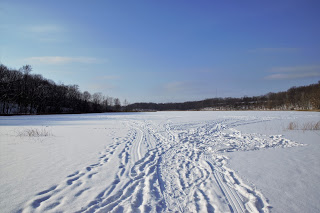 You can see all the tracks where the ice fishermen are going out trying to catch a little something.

I have to admit I've spent more time out walking than I should have - until I really couldn't stand any more of the cold lol - but when the snow comes and the roads are bad I don't get out as much. Obviously this has meant not getting as much done around the house and crafting as I had hoped. I did get some of the kitchen cupboards sorted which was on my list, but the rest of my list is untouched. Sigh. I have kept up with the housework and cooked (mostly) from the cupboards so haven't spent a lot of money.