Thanks for the comments!

Eileen T. - Yes, #1Day12Pics is through AYWMC (A Year with My Camera). I completed the course in 2017. It's how I learned to use my camera properly. I continued on with EDPS Camera Club (Emma's paid camera club). I was one of the first people who joined the club so got a really great lifetime membership. We still do the monthly #1Day12Pics. Any large project I had in mind got put to the backburner when Mum got sick. I can't seem to concentrate or make plans about much of anything. I am going to try to do this monthly project though with a different theme each month.

The days have been plodding along. I haven't been getting much of anywhere. Mum is still the same. The doctor is going to prescribe some anti-depression pills as they seem to think that is part of the problem. I suppose if you go from being independent to not being able to do the simplest things it might make you a little depressed. Hoping this will help.

I've been out enjoying the sunshine. Walking a lot - too much probably. Yesterday I had a headache that wouldn't stop and ended up having to go to bed early. I hate the ones like that. I end up feeling sick and just can't bear to move. The only thing that seems to help is sleep.

Thursday is supposed to be a rainy day so I have a list of things that I've been putting off that I need to get done that day. No excuses! I have to play catch-up. On a good note the library is opening again and with it the bookstore. I shouldn't be shopping there but it's been a whole year! I also have boxes of books to donate. You have to call to make an appointment and I put it off for the few weeks they were open and accepting donations. They need to go! I definitely won't miss the books. They have been packed up in boxes for months and (apart from the space they are taking up) I haven't given them a thought!

All being well I am going to Skype with Mum tomorrow. I hope she's well enough. I've got some fun news to share. Apologies to my wonderful MIL who I haven't told either but who reads this blog (I just sent an email and forgot to tell her).

Some of my photos and a small article got published in a free local magazine! I lack confidence and doing this was really a big step for me (so much so I didn't tell anyone and my poor stomach ached for days). Hopefully this is the first of me putting myself out there. I do want to work on some wildlife cards too. 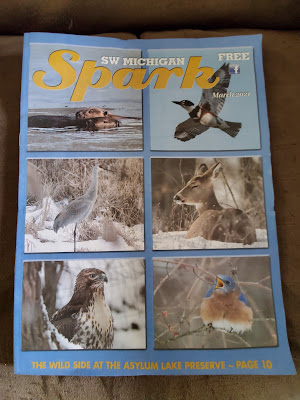 Posted by Sharon at 9:44:00 PM
Email ThisBlogThis!Share to TwitterShare to FacebookShare to Pinterest