It's been a couple of weeks since I joined in with Five on Friday with Amy and the others at Love Made My Home. My daughter moved to Minnesota from Michigan at the beginning of January and I've been off visiting her for a couple of weeks. I had a lovely visit. Even though we had moved her it was nice to see her settled in and spend a little more time at her flat. It's really secure, quiet and comfortable so makes me feel a lot better that she is settled safely.

Anyway, while I was there we did venture out to visit a couple of State Parks. It was cold (sometimes as low as -18C/-1F not including wind chill) and still snowy/icy. We decided to bundle up and go explore a little. Each state has state parks that are are recreational parks - hiking, skiing, canoeing, beaches, camping etc - and if you pay a fee you can have access to them all year long. In Minnesota the fee is $25.

For this Five on Friday I'm going to share our visit to Crow Wing State Park. 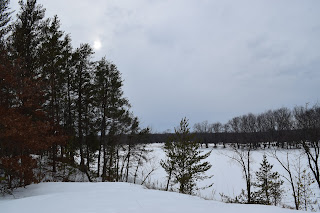 Crow Wing was reportedly the scene of a major battle between the Dakota and Ojibwe in the year of 1768. It was also the home of several great Ojibwe leaders. 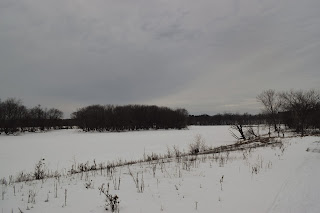 The Crow Wing River meets the Mississippi river where the park now is. Trading posts sprung up around the river and people settled here. Fur trading gave way to logging. At its peak the settlement boasted 700 strong. The rivers here were (when we visited) covered with ice and snow, barely recognisable.

For over a century this was the northernmost settlement of Europeans on the Mississippi River. 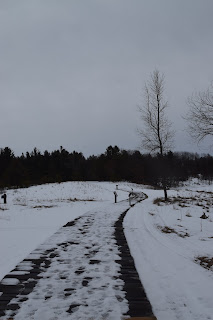 They have recreated the old boardwalk that would have gone through the centre of town. 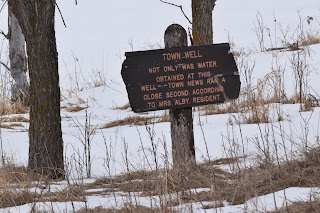 There are some great little signs along the way telling you of things around what was the town. 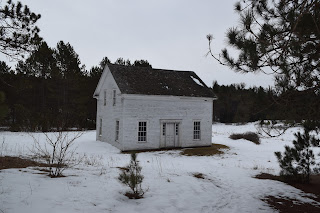 This is the Clement Beaulieu house. It is thought to be Minnesota's oldest standing house north of the twin cities (Minneapolis/St Paul). It was built in 1849 - so new compared to some of the buildings in England. It is situated on the hillside and would have overlooked the town below on the Mississippi River. He is considered to be one of the founders of the town.

Beaulieu was the descendant of prestigious French and Ojibwe lines which I find quite interesting. I might have to look up more about him and his family! 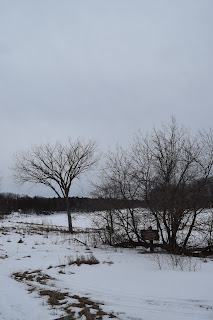 The demise of the town came in the 1870s when the Northern Pacific railroad decided to build the railroad crossing a little to the north at Brainerd. The remaining local Ojibwe were 'relocated' to the White Earth Reservation (Clement Beaulieu and his family included) and the town became a part of history.

I hope you've enjoyed the little tour - as you can see it was very snowy (none of the paths were cleared) and cold so we didn't walk far. I am looking forward to visiting in the summer and seeing the river at full flow!
Posted by Sharon at 8:09:00 AM
Email ThisBlogThis!Share to TwitterShare to FacebookShare to Pinterest
Labels: Crow Wing State Park, Five on Friday, Minnesota