Sunday is usually our day for going for a walk. We've been doing really well despite all the cold and snow. We had plans to go a little further afield today and walk quite a way, up some sand dunes where there is a fantastic view, and down onto the beach. It was not to be. We woke up to another blanket of snow and the roads looked pretty nasty as it was heavy and wet snow. We did decide to go out but not as far as we wanted to. We thought maybe we'd go visit South Haven where there is a lighthouse and were to be some ice sculptures and then onto Grand Mere Park for a walk.

Once we got to the lighthouse we changed our minds. Oh Wow! It was SO cold! Bitterly cold. The wind was blowing and stirring up the snow. My whole face got numb as did my hands as I was trying to take photos. 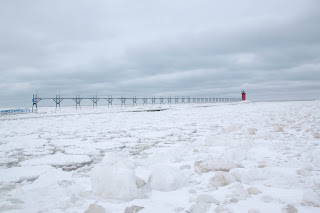 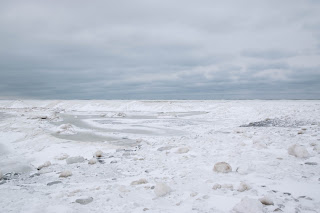 Some of the ice had melted and we could see and hear the waves of the open lake crashing against the ice piles. It was really eerie to watch.


I'm going to try attaching a video of the ice in the channel up to the lake. It was taken with my phone so not the greatest.

We decided to forgo the walk. Hubby was still coughing quite a bit and it was just too cold. We did go on to another lighthouse and a walk along a beach. It was almost too cold for that too! I'll do another post tomorrow.

Oh, here's one of the ice statues. I didn't get any really good photos. They were really difficult to take on such a cloudy day with lots of cars and shops in the background. 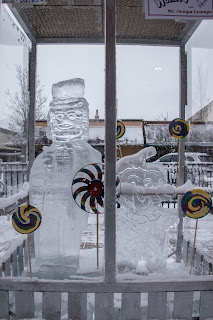 They were fun to look at! Hope everyone had a great weekend!
Posted by Sharon at 10:37:00 PM
Email ThisBlogThis!Share to TwitterShare to FacebookShare to Pinterest
Labels: Cold, Lighthouse, Michigan, walk on the beach