Ever since we went to visit  middle son one evening and watched the sunset over St. Joseph Lighthouse I've been wanting to go watch a sunset over the lighthouse at South Haven. I don't get to go often especially when the sun sets later at night in the summer as it is a little drive to the lakeshore which makes for a really late night. However, weather hasn't been co-operating. It's either been too snowy or just cloudy.

Earlier in the week when I looked at the forecast it said Friday would be sunny so we thought that would make a good choice. Also it's the beginning of the weekend so hubby doesn't have to worry about work. Friday rolled around and so did the clouds. Late afternoon it was looking pretty dismal. The forecast was still saying partly sunny so we headed towards the lakeshore.

So glad we did! The sun was beating down when we arrived. It's a shame the temperature didn't match lol. We did get to hang around in the cold and watch such a glorious sunset. We weren't the only ones braving the cold. 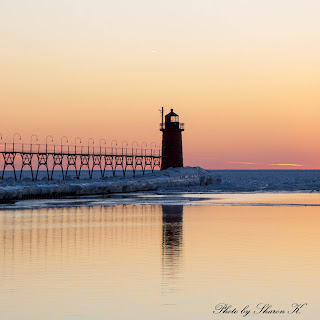 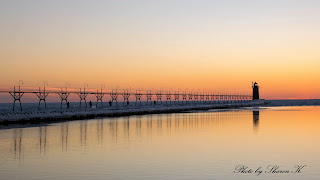 I still have to sort through a lot of photos I took but here are a couple. I hope you enjoy. It was so very beautiful to watch, so serene and surprisingly calm. There was an awful lot of ice still around but stunning.