Half the Week Gone...

… and not a lot done! I did finally get around to doing my washing, but I think I have a touch of the after-holiday blues again. At least it won't be long until I see daughter again. She's coming to visit in November. I was sort of worried about whether she'd come as she's buying a house and will be moving not long before then, but she says she's coming. I guess that house buying means she'll be staying there for a while. A part of me was hoping she'd be coming back some time, but it seems she's building her life in Minnesota. I'll just have to save money and frequent flyer miles lol.

While I was there we went to a baby shower for a friend of hers. Before I left I made a card for her. 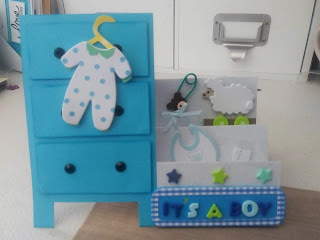 I quite like the way it turned out. I haven't been to a baby shower in years. It was quite fun (despite only slightly knowing the mother-to-be). I won a prize as did daughter.

I also spent my birthday money at Crafts Direct - the local independent craft shop. My birthday was in May but when daughter asked what I wanted I said a GC to the craft shop. I love that place! They have so much stuff. It has to be my favourite craft shop. I did manage to fit it in my suit case lol. Now I have to use those goodies!

Hope everyone is having a good week!
Posted by Sharon at 7:39:00 AM
Email ThisBlogThis!Share to TwitterShare to FacebookShare to Pinterest
Labels: baby shower, card making