Thanks for all the lovely well wishes for the flight and trip! My flight went okay. It took a little longer than it was supposed to as there were storms that we had to go around. I did make it okay and daughter and her boyfriend were waiting to pick me up. We went straight from the airport to the Minnesota State Fair.

Oh wow. It was fun but so very, very busy. Looking later, it apparently broke the fair record for attendance - 270,426 people passed through the gates! It certainly seemed very busy. All you could see were people. I didn't like that part of it as I'm not a big fan of crowds! It was quite hot too. We had a good look round and our feet were all aching by the time we made it back to the car. It was certainly quite an experience.

We've had quite the three days and I'm ready for a rest! Sunday we took the dogs to a dog beach up in Duluth and on Monday we took them to the Renaissance Faire (very fun!). 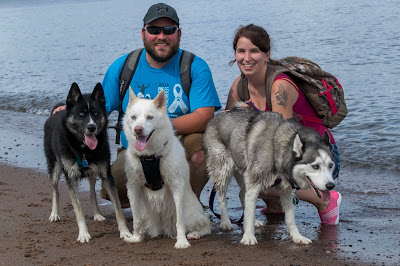 Daughter, boyfriend and the husky girls. Shasta was the only one who wouldn't sit nicely lol. The humans are back to work today and the rest of us are recovering! I think we're all pretty tired. Daughter has to work today and tomorrow and then has a couple days off at the end of the week. Hope everyone is having a good week!
Posted by Sharon at 10:22:00 AM
Email ThisBlogThis!Share to TwitterShare to FacebookShare to Pinterest
Labels: daughter, Holiday