Wow - a Week Has Passed

...since I last posted. I didn't mean it to be so long. I'm plodding through the days and they sort of seem to be blending together.

Mum is still the same. No improvement. My sister is struggling. There seems to be lots of doctor calls and visits from medical professionals, but they don't seem to be communicating much with each other. It is getting very frustrating for my sister. Yesterday it looked as though they would be admitting Mum back into the hospital, but when she got there they decided not to and sent her back home again! Mum isn't eating much or drinking either.

There is some improvement on the communication between my two sisters and Mum. I'm not going into details, but my older sister is now coming so that my sister who is caring for Mum can have a break a few times a week. Also they both talked to Mum and told her that she needs to be more verbal about telling people when she isn't feeling well or what is hurting or what she's having trouble with. Mum is old-fashioned, stiff upper lip and just getting on with it. When she's asked how she's feeling she will just say fine even if she's not. I have to admit I do that too. But right now that's not good for her. They can't help if they don't know what's wrong.

Life is still going on. The days are getting longer. I can't believe we are in March now! The snow is starting to melt and there are hints of some things start to grow. My husband had to clean up some bird seed in the garden. It had fallen on the ground and been buried in snow and now that the snow has melted there is just a mess!

I have blogs to catch up on as I admit that I haven't been on the computer too much. It's a good way to spend a Friday evening. 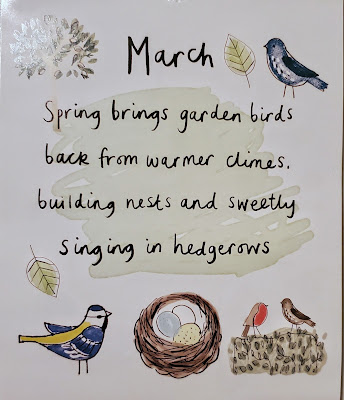 I shall chalk this week up to a fail on the blogging side of things and start again!

Posted by Sharon at 7:06:00 PM
Email ThisBlogThis!Share to TwitterShare to FacebookShare to Pinterest