It was Mother's Day here on Sunday. The weather was terrible. Instead we went out on Saturday. Husband asked me what I wanted for Mother's Day and I said that I would love to go back to Kensington Metro Park as someone had posted on one of the bird sites that the Sandhill Cranes had babies. It's a huge place and I knew that the odds of seeing one wasn't good, but I was so happy and surprised to see a baby crane! They are called Colts (I had to Google that lol).

There are a few cranes around the nature trail. We were walking along and saw a group of maybe four photographers standing near (giving it room) a Sandhill Crane that was sitting down. Hubby didn't stick around (there was a bench nearby that he went to sit on). I waited to see if the crane was going to get up as one of the people said there was a baby. Sure enough she got up and the little colt appeared. It couldn't have been that old! It was wobbly on legs and Mum was feeding it. Both parents were around. I was happy to see that the small group of us gave them plenty of room and they seemed unbothered by us. We all had pretty long lenses so no need to get up close.

This is one of my photos 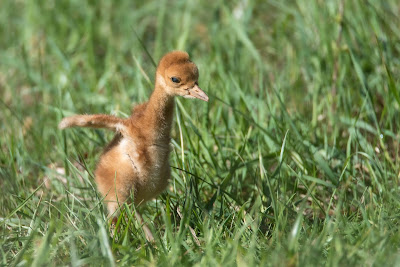 It was trying to catch up to parents. It did not want to be too far away!
It was a really lovely day and the weather was beautiful. We got to see some goslings too as well as lots of other birds. I really love going there. I wish it wasn't so far away!
Sunday was all change on the weather. It was kind of a horrible day, drizzly and chilly. I did manage a walk by myself in the morning. Son came over in the afternoon. So that was nice.
Ending this post here as I am trying to type and for some reason random words are appearing. Yikes! I don't know what I'm doing wrong lol.
Posted by Sharon at 9:16:00 PM

Another Sunrise
by Charity Jackson