My dear daughter, youngest child, graduated university last Christmas. She had gone away for university (75miles away) and after graduating decided to stay in the town she had been living in. She had a job there (one she'd had while in Uni) and a boyfriend. She rented her own place to live. She split with her boyfriend in September, her lease is up at the beginning of December and she really wants to move on from the job she's in. The people upstairs from her are terrible. Very noisy. Her job is..so-so. She has been applying to jobs in her field but was becoming discouraged as she hadn't heard from many of them.

She made the decision not to renew her lease, pack in her job (take a couple of lower-paid, out-of-her-field jobs if necessary) and move back home. I must admit I was looking forward to this as we are close but she's lived away for a while.

Last week she heard from a job she had applied to. It is in her field, a foot-in-the-door and good pay. She had two interviews and was told on Wednesday that she has the job. She will start in the New Year.

Sadly it is in another state - over 900 miles away. A great big adventure for her. I am happy for her. It isn't in another country (I moved countries!) and not too far away. A 9-hour drive. It is a great boost for her as she was feeling down. We will be moving her at the beginning of next month from her town to ours where she will stay for a month before leaving in the New Year. We will get to spend the holiday together.

I am so proud of her. Just a little sad too. 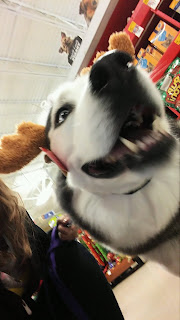 On a happy note this is a picture of Shasta my daughter sent today. They were at the pet store and she tried on some reindeer ears. Poor Shasta! It was my funny for the day.

I hope everyone has a lovely weekend. We were quite warm today - my window was open at one point - and I made the most of it. Good thing too as our temperature is supposed to DROP by 18c tomorrow and we are forecast snow!