Ug is it over yet?

Not writing politics on my blog just to say I'll be glad when it's all over!

Dull and raining here in Kalamazoo. Not too much happening. My two 'kids' who don't live at home will be popping by today. One works at a newspaper putting together the pages so he says it's likely to be a LONG day today as they will be waiting until the last minute possible to publish.

Crafted yesterday - got three cards made and a good start on decorating Mum's mini-album. I still haven't found the embellishments I was going to use. Grrr. Nevermind. I'm trying not to dwell too much on it.

I did make some focaccia bread and some cupcakes. The cupcakes were made (admittedly) from a mix. The box was on clearance after Halloween for $1.24 and includes both mix and the icing. They turned out okay. The icing was a pain, so they aren't the prettiest but luckily aren't going anywhere but my house.

I am trying to do better with food shopping. I think we are still spending too much. I have cut down a lot since finishing work as I cook most foods from scratch, but I still feel like we end up spending too much. 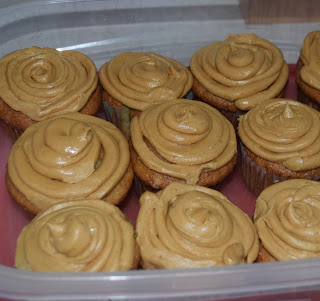 The bread turned out better. It was yummy. I forgot to take a picture of it when whole, ended up taking one after we'd eaten half of it. 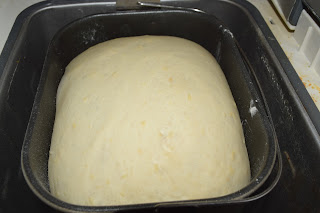 I do the dough in the bread machine then pull out and form. It was supposed to have parmesean cheese in, but apparently we must have used it all. Instead I stuck cheese on the top. 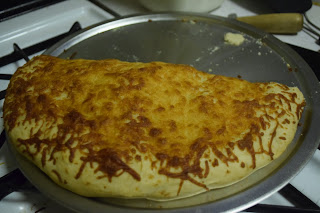 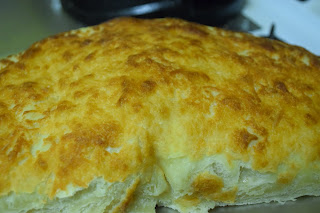 Very yummy. Went great with the salad we had for dinner. Would have been good with a stew or something hearty.

Posted by Sharon at 8:57:00 AM
Email ThisBlogThis!Share to TwitterShare to FacebookShare to Pinterest
Labels: food.