End of the Week

The end of another week.

Went to Jane's today. It was a frustrating time there. Let's just leave it at that.

I didn't get a lot done yesterday. I did have my hair appointment. I ended up going early. My hairdresser contacted me while I was out walking and said she had a cancellation and could I come in early. I said yes as this was a rescheduled appointment and I thought it would be nice. Turns out she managed to get the person after me to come in early and was able to get her children instead of having them dropped off at her workplace. She's a single Mum and the children here are already out of school.

Today I went for my walk. After Jane's I came home, did a load of wash and not a lot more. I have a lot of stuff I need to sort out. I didn't. I ended up chatting with daughter for an hour or so. She's had a busy week at work so we haven't chatted much (there have been texts). I messaged with my sister this afternoon too. It's our Friday routine. She said that things are coming along with Mum's flat regarding the sale. There was a bit of a faff due to the lease (the flat was Mum's, but the land it is on is leased) and the buyer's mortgage, but sister said the mortgage has gone through so she thinks it's just a matter of signing things. She and her daughter were over at Mum's packing things up and has arranged for the remaining furniture to be picked up on Wednesday.

Not sure it will all be finished by the time I go over, but I'm not sure if I would want to go see the flat or not. So many memories there. I leave for England July 8th - just for a couple of weeks. I haven't said anything about it on her as although I am looking forward to going home and enjoying food and stuff, it will be really strange without Mum. I want to just go sit on her bench and have a chat. 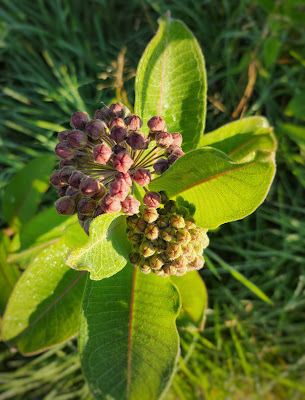 Milkweed. I love seeing this plant and there was a lot of it on my walk yesterday. I love seeing it all year long. It has such a life! I think I might have to photograph a whole cycle of it. There are lovely seed pods, fluffy bits and beautiful flowers. Monarch caterpillars feed on the leaves and Monarch butterflies love the flowers. Always makes me smile when there is an abundance of it! 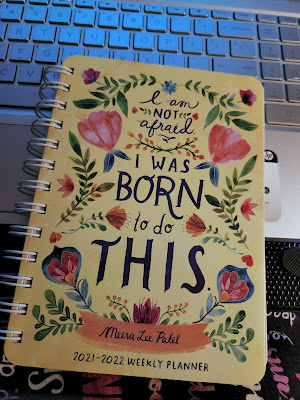 Okay, I am admitting that this is a last minute thing. I only took one other phone photo for the day and that was a signature on a painting at Jane's house. This (and I think I've taken a photo of it before) is a diary I bought at the beginning of the year. For a while I was writing down what I had seen on my morning walks, then I stopped and now I have started again! I've managed to keep it up for a little while so that makes me smile!
Tomorrow we are back at Jane's house. Husband and I are going over to take some donations to the charity shop and then we are loading up MIL's furniture that she wants.

Posted by Sharon at 11:11:00 PM
Email ThisBlogThis!Share to TwitterShare to FacebookShare to Pinterest
Labels: everyday, Just Another Day, Photo a Day

Farm to Trouble
by Amanda Flower

The Sweeney Sisters
by Lian Dolan