I can't believe June is over. It has flown by. Probably because we were busy with camping and Jane's house. I can't say I accomplished much except for at Jane's house. We hope to finish up this weekend. It will seem so strange to be done. Hopefully the new owner will have many years of joy in the house. Jane was very proud of her house (though not once it became so cluttered). She used to spend hours in the garden before her back became really bad. When my children were little, she used to 'hire' them to come over and weed for her. She was really proud of her garden and it is really beautiful.

This weekend is a holiday weekend in the US. I can't say we'll be doing much of anything. If we don't get finished tomorrow at Jane's we will probably go over for a while on Saturday. On Sunday I am hoping to persuade husband to drive to the National Wildlife Refuge on the other side of the state. It will be a treat as petrol/gas is quite expensive now, but we haven't been out for a drive for a while and I'll be gone for the next three weekends (in England). That's my excuse anyway lol. Monday we'll probably have a quiet day in.

It's quite a boring photo today, but it did make me smile as my friend and I walked in the woods. It was quite hot today and out in the sun things were hot and sticky. We made sure we stuck mostly to the woods, where the sun shone through the thick leaf cover and it was definitely cooler! 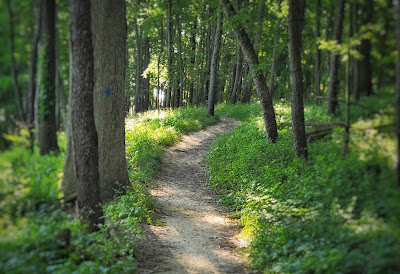 Posted by Sharon at 9:28:00 PM
Email ThisBlogThis!Share to TwitterShare to FacebookShare to Pinterest