The Legend of Sleeping Bear Dunes

It's the weekend so I thought I'd do this post with some photos of Sleeping Bear Dunes National Lakeshore that we visited and the legend behind it.

This is a beautiful area of Michigan. It's about 206 miles away from us (over 3 hours drive) so we don't go as often as I would like. The area is really beautiful and there are so many places within the area that we haven't visited. On our way back from our last camping trip up north (a few weeks ago) we stopped on our way home. I'd love to be able to visit in Autumn as I bet the colours are stunning.

Story of Sleeping Bear Dunes - two versions of the legend.

The Story of Sleeping Bear
Sleeping Bear Dunes National Lakeshore gets its name from one dune in particular—the Mother Bear. Perched along the edge of the large dune that towers about Lake Michigan, this dune, at one time, resembled a sleeping bear. The Ashininaabek used the Mother Bear as a landmark and tell a story about how she came to be there.
Two different versions of the story are commonly told. These stories are an Anishinaabe (Odawa/Ottawa, Ojibway/Chippewa and Potawatomi) oral tradition of a sacred place within their homelands in the Great Lakes.
Once, long ago, in the land called Wisconsin across the great lake, there was terrible hunger and many people died. A bear and two little cubs were trying to leave that place and come around the lake where there would be more food.
They walked for many days on the beach together, but after a while the two little cubs began to whimper with hunger, and so the bear decided to swim across the rest of the lake.
They waded into the water, one cub on each side of the bear, and they swam off into the lake a long way. After a while the cubs began to get very tired, and so the bear said, “Try hard, the land is not very far.” And very soon they did come in sight of land.
But gradually the cubs got weaker, and only ten miles away, one cub sank into the water. Soon after, the other also drowned.
The bear’s heart was broken, but she could do nothing. She waded ashore and lay down, looking out on the water where her cubs had died. Eventually, both of them came to the surface as two little islands, and so the bear still lies there atop the dunes, looking after her children.
Long ago, along the Wisconsin shoreline, a mother bear and her two cubs were driven into Lake Michigan by a raging forest fire. The bears swam for many hours, but soon the cubs tired. Mother bear reached the shore first and climbed to the top of a high bluff to watch and wait for her cubs. The cubs drowned within sight of the shore. The Great Spirit created two islands to mark the spot where the cubs disappeared and then created a solitary dune to represent the eternal vigil of mother bear.
The islands mentioned are North and South Manitou Islands
The view from the top of the Sleeping Bear Dune is just so beautiful. The lake looks really blue. 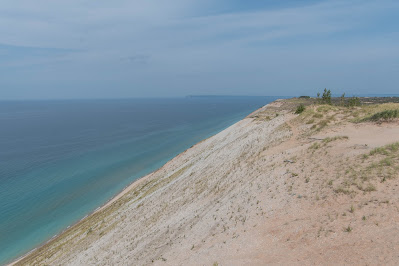 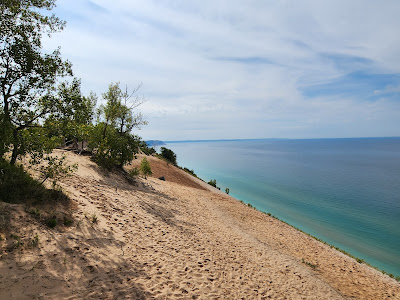 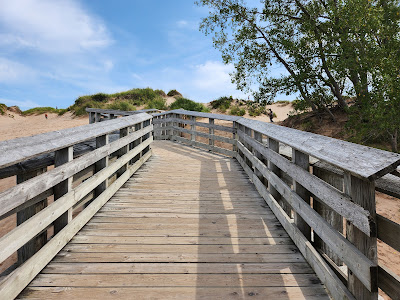 There is a sign warning people about the walk down to the dune. It's a little different from the last time we were here - check out the sign on the side of my blog! 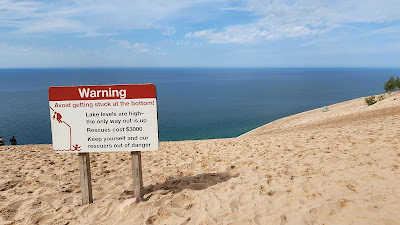 While we were here we only saw two people climbing up the dune - a father and son. They walked for about a minute before resting again. It was obviously a hard slog up the dune! 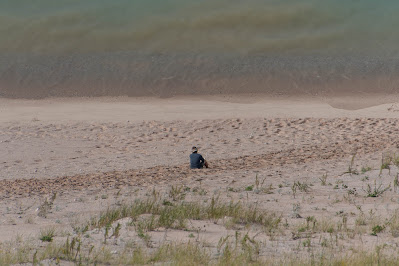 Or maybe he was just enjoying the view!
Posted by Sharon at 11:58:00 PM
Email ThisBlogThis!Share to TwitterShare to FacebookShare to Pinterest
Labels: Sleeping Bear Dunes