Thanks for all the lovely comments on the last post. I'm not sure I could stand the isolation either, but it's a nice fantasy lol. I think it's just that I'd love to be able to take photos of such lovely areas rather than where we live. I also think it would be kind of interesting to see how I would do in such a place - not sure I'd do it alone. I'd take husband with me - at least for a while. Maybe we'd just drive each other crazy.

It wasn't a bad day yesterday. We went for a drive in the morning. I Skyped with Mum. Middle son came up to go to the cinema with husband and older son. Mum and I were trying to work out where we're going to go for our holiday, also trying to work out when I'd go over. I am thinking booking plane tickets is in the near future.

Sunday dawned with high winds - we're under a wind warning until tomorrow morning. We took a drive to the lakeshore. It was extremely windy - difficult to be out for even a little while - but we weren't the only ones! It was snowing and blowing on our way back. Worse still, when we got back to town we found out there had been freezing rain and the roads were very icy. Luckily husband is a really good driver in all weathers and confident about doing it. I would have just ditched the car lol.

We hadn't been home for long when I thought I saw something spark outside the window close to my chair. I then thought perhaps it was from the television but sure enough something banged and a wire came down. Husband had to ring the power company to let them know but I am pretty sure there are lots of lines down. I don't know why they don't put them underground. We lost power to part of our downstairs which happens to include heat. It's an older house and apparently there is more than one power line coming into the house. So no heat. Not sure when it will be fixed. We do have an electric heater so it is plugged in the living room and I'm getting the blankets out lol. 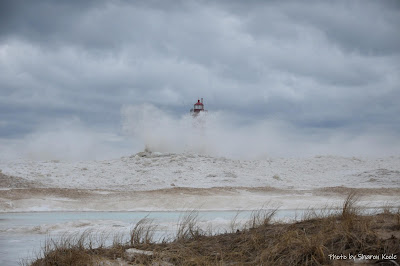 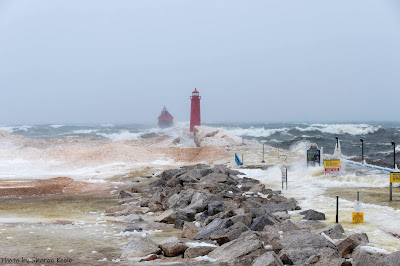 Two different lighthouses we visited. Usually we walk along to the right of the rocks, it's a walkway. Not today! The water was coming over really high and fast! It really amazes me every time I visit Lake Michigan when it's like this. I would never have thought that a lake could whip up such fury.

Hope everyone had a good weekend!
Posted by Sharon at 7:19:00 PM
Email ThisBlogThis!Share to TwitterShare to FacebookShare to Pinterest
Labels: Lighthouse, Michigan, weekend, Windy