One year ago today I/we took a giant leap. It was my last day at work in a job I had been in for ten years. I had gone back and forth for a while wondering if I was doing the right thing by packing it in. For eight of those ten years I had been going in at 3.30 in the morning which meant getting up at 2.30am. I am not a morning person. I sort of fell into the job. I did enjoy it. At least part of it. I also got stressed. I took phone calls on my days off, holidays even ended up going in on my days off if my back-ups needed help.

There were a lot of things that went into my decision to quit - my foot still hurt, my Mum had been sick and I desperately wanted to visit longer than the two weeks I had always managed before, the place I worked was going downhill and the job was going nowhere (pay was not that good) and Hubby and I wanted to reconnect. My hubby was very supportive. He missed me, the person I was before the job. I was tired all the time. I hadn't realised how tired until I had to take three months off a couple of years before when I had to have surgery on my ankle. That was when I started going in later - 5.15am instead of 3.30am. I realised I couldn't do that early anymore.

It's been a great year. Good decision. Yes, we took a drop in income. We're still learning. Still budgeting. Still getting used to not buying something just because. We're having fun being able to do things again, going places. When I worked we didn't have the same days off and I worked holidays. I haven't even got a dent on all the things I want to get done around the house.  It might not be a permanent thing. I will probably, at some point, find something that brings in an income of some sort. I am not (contrary to what people thought would happen) bored. I am enjoying going to bed when it's dark and getting up when light. I especially liked not having to get up in winter and clean off the car in the dark and cold. 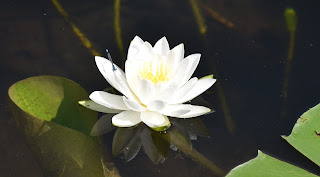 Posted by Sharon at 11:17:00 AM
Email ThisBlogThis!Share to TwitterShare to FacebookShare to Pinterest
Labels: Year ago