Firstly, I want to say thanks for all the wonderful, supportive comments on my last post. Reading them really helped. Sadly, we had to say goodbye to Shadow yesterday. He was only getting worse and although I would have loved for him to stay it would have been selfish of me to keep him around just because I didn't want to say goodbye. He was getting weaker. Wednesday night he started to get a little shaky on his feet too. Husband called the vet yesterday morning and got an appointment for the afternoon. Although he wasn't feeling well we did have a few cuddles. He let me hold onto him as we watched birds out of the window and we did go into the garden for a while.

Husband and two sons went with him to the vet. He was an indoor cat and not used to going outside - in fact until the last couple of days he'd been terrified of it and would cling on like crazy if you tried to take him outside - and I was worried he wouldn't handle the little car trip very well. But son held him on a blanket and they said he barely meowed. I couldn't go. I couldn't do it. I was already in tears and I didn't want to stress him out. I think he was ready as they said he didn't struggle, just laid in arms as he was held. He's never been a scratcher or a biter but I was worried he was going to be in distress.

The vet checked him out. He had a tumour in his stomach. Vet says it happens sometimes with older cats. He would only get worse and be in pain. Husband and sons were with him while he went to sleep.

The house seems really empty without him. He had a bed in the living room and kitchen, both are now just blank spots and seem really empty. I keep thinking I hear him meowing. I'm just a little sad and tearful today. 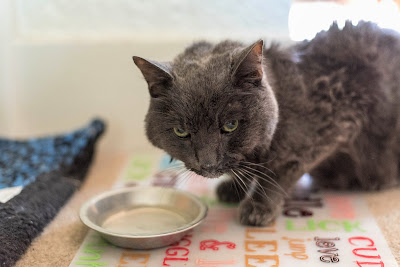 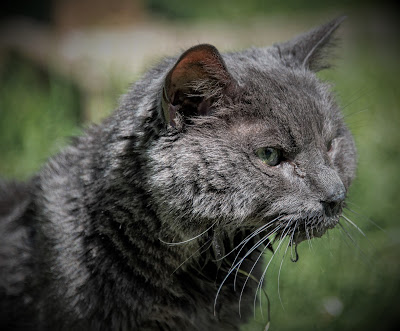 Posted by Sharon at 11:51:00 AM
Email ThisBlogThis!Share to TwitterShare to FacebookShare to Pinterest
Labels: cat, Pets, Shadow