Been plodding along. Walking. Hot. I found out why I was getting phone calls from the power company. The road that crosses ours just a house away had a tree fall down across the road. It must have cut off their power. Later on Tuesday when I came back the power company was working on the tree. I had no internet yesterday and when it finally came back on the power went out! I suppose it was when they were fixing things. Luckily, the power wasn't off for long - probably an hour or so and the internet also came back on. However, I was still getting phone calls from the power company telling me my power wouldn't be on until September 2nd! Thankfully it was already on. Later last night I got another call telling me it was on. Lol. I'm glad the people at the top of the street got the power back on at least.

I haven't been doing much sorting, but I have been listing Ebay items. I've sold a few, so got a few packaged up to drop off at the post office. I have also been up in the craft room. I haven't got around to photographing any of the items I've made. I am hoping to take photos tomorrow. I've been having fun, but I seem to lose time when I'm crafting!

I can't believe it's the last day of August today! Where has the month gone?

Tomorrow I'm taking a break from walking with my friend. I told her I was having a photography day. I just want to wander and take some photos without having to worry about getting in steps. 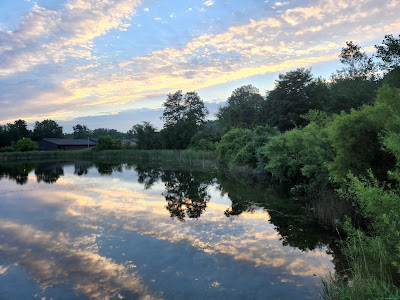 Things That Make Me Smile Day 243 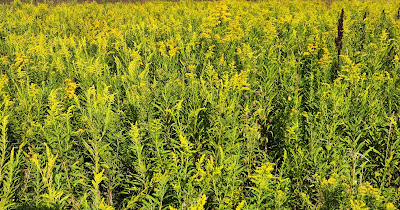 To me, seeing fields of yellow in Michigan signals the end of summer and the coming of Autumn. The wildflower field is now a field of yellow. I think it's Goldenrod but could be wrong and it could be Ragweed lol.

Posted by Sharon at 9:40:00 PM
Email ThisBlogThis!Share to TwitterShare to FacebookShare to Pinterest