Yesterday was sticky and humid. We didn't go for a walk. To be honest, I've had enough of stepping outside and barely moving before everything becomes sweaty. I'm not a big fan of the heat, but even less of a fan of the humidity. I think it was 80+ % humidity when I got up yesterday. Been humid most of the day today too, though things have got a little better this evening. Fingers crossed it won't be as bad tomorrow. I did go for a walk today but it wasn't that comfortable.

We did go out for a drive yesterday, just to get out for a little bit. I had seen a lovely sunflower field advertised on a Facebook group I'm in and, as it wasn't too far away. I was really surprised that there was absolutely no-one there when we arrived. It was set up lovely. There were three paths through the field that led to little spaces where people could take photos in front of the sunflowers - especially handy if you're a portrait photographer. I think that should solve the problem of people crushing flowers to get 'that' shot (I hate it when you see that in a field of flowers). The owners of the field (surprisingly) don't charge anything to visit or to take photos (even photoshoots). They do sell some sunflowers and accept donations. I bought a few sunflowers so I could take them home, take some close-up photos and put out for the birds. It was so beautiful.

Things That Make Me Smile 219 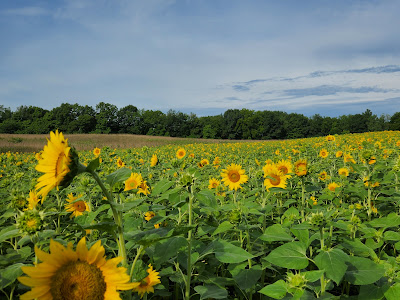 Had to be a sunflower photo. I took a couple with my phone, but most with my big camera. I think I could have stayed there for ages lol.

We took a leisurely drive back though the countryside to home again. It was nice not to be outside for too long!

I wasn't sure this morning if I was going to go for a walk or not. I didn't sleep well again. It was hot and sticky and husband was snoring up a storm. I could hear him through the earplugs I wear and even though I nudged him several times he still snored so I ended up on the sofa. Ugh. Also the weather report said storms were expected again in the morning. There were no storms though and I felt as though I should walk so I went for one. It was okay.

I got normal household things done, nothing extra. Most of the day was sticky enough that I felt icky even if I moved. I have shopping to do tomorrow so I can complete the menu for the week. I'm sticking to things that don't have to have the oven on for too long. Hopefully, I will be more productive in other areas tomorrow as it is supposed to be a little cooler.

Things That Make Me Smile 220 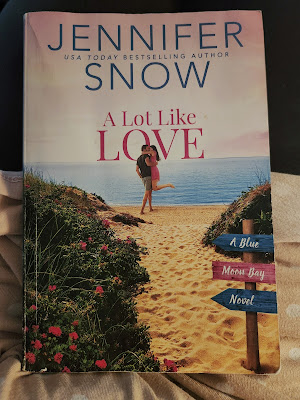 A quick read. Made me smile. I started another book but it was about a mother passing away from Covid and hit too close from home that I started crying. I've put it aside for now. I'm not sure I'll ever be able to read it.

Posted by Sharon at 9:45:00 PM
Email ThisBlogThis!Share to TwitterShare to FacebookShare to Pinterest