This morning it was quite chilly. There was a thick frost on my car, and a thick frost in the field at the nature park I usually walk in. I don't generally go there on the weekend, but because of the holiday and daughter visiting I decided to take a walk there before we started our day. It was -4C as I was walking. The field was absolutely beautiful. It wasn't long before I came across a couple of male deer. They seemed a little wary of me, but (weird but true) I talked softly to them enough to take a few photos before leaving them to their breakfast. 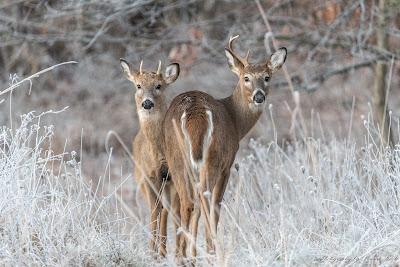 I walked down to The Point where one of the beaver lodges are. By that time the sun was just coming over the horizon. Quite beautiful. Not everyone is happy about the trees the beavers are downing lately, but I find it really interesting to watch. It seems that every morning a new tree has been gnawed upon. This happened last year too until it got too cold for them to do much work. I don't know too much about beavers but it seems to me that they fortify their lodges for winter and put some of the branches they strip off beneath the water, close to their lodges so they can chew on them during the winter. 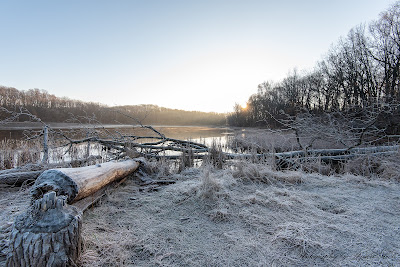 There were no beavers this morning, but I saw a muskrat (maybe more than one - who knows whether it was just the same one popping up!).  There was a thin layer of ice on top of part of the lake and I watched as one popped up through. 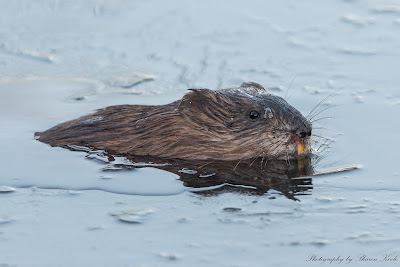 Daughter and I didn't end up going far. We took the dogs on a couple of walks around our neighbourhood. I think the drive is catching up with her as she was awfully tired today and took several naps. I know she's been working hard too, so I decided it was more important to let her sleep and rest a while!
Posted by Sharon at 10:39:00 PM
Email ThisBlogThis!Share to TwitterShare to FacebookShare to Pinterest
Labels: Asylum Lake, beaver lodge, deer, frosty, Michigan, Muskrat