It was really cold this morning and a touch snowy. Our road was pretty icy - as it had both rained and snowed the day before. The main road was a little icky but I braved it to go to the park for my walk and by the time I got finished the road was a lot better. I already miss the warmer days when all I had to do in the morning was hop in my car. Now I have to warm the car up, dress in long undies, gloves, hat, boots, scarf. Today I even wore double socks and double gloves. It really was that cold!

Before I left for my walk I looked out of my back window and although I don't have a clear view of sunrise the sky was ablaze with beautiful deep colours. Yes, it really was this colour. 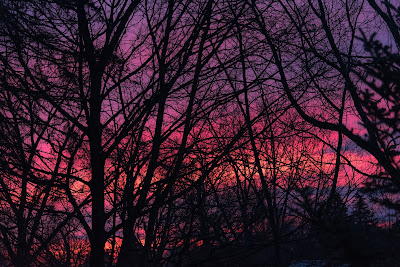 Sadly after the sunrise there wasn't a lot of sun for a while - just lots of clouds!!

I didn't get as many errands done as I had hoped. I did get the food shop done, but it was busy and crowded and I just couldn't face going anywhere else. I am glad I went to the shop I did as I read later that the one I sometimes go to (a little further away) was going to be closing at 2pm until Thursday for 'deep cleaning' due to increased local Covid numbers. I read that to mean there are several cases at the shop as there are other branches of this shop in our town and none of those have been closed! Over here they won't tell where the cases are so it's speculation on my part.

Got one more shelf cleaned out at home. Not as much done as I wanted to. Daughter called and we chatted for a long time. She said she was feeling a little lonely. Her workplace is now working at home for good so it means little interaction for her with people. It's nice that she doesn't worry about the dogs but not so nice that she's all alone all day.

It's back to Jane's tomorrow. Oh, I almost forgot to share the photo of the room. I know it's not perfect. We are leaving the books on the shelves (they have been sort of looked through) as they are mostly history/genealogy books and we are hoping to have one of her genealogy friends come look through and take what they want or think their genealogy group would be interested in. The dressers are empty. I am SO pleased it looks like this. It was one of the worst rooms. We could not even get into it when we first started! 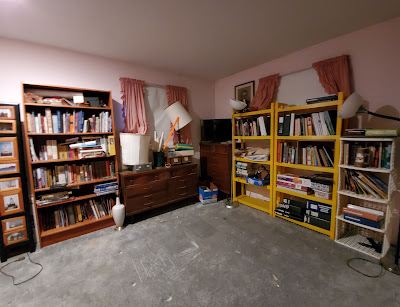 It really makes me feel as though we are making progress!
Posted by Sharon at 9:11:00 PM
Email ThisBlogThis!Share to TwitterShare to FacebookShare to Pinterest
Labels: everyday, Jane's, Sunrise