Well that went rather quickly! We managed to get out today for a bit. It was really windy again so we took another trip to the lakeshore (a bit further away) and I got to take more photos of the waves. Today was nicer than yesterday and there was some sunshine. It always makes me a little more cheerful. It was above freezing today but I still bundled up - with the wind and being by the lake it felt a lot colder than it was.

When we were done on our adventure we popped over to Jane's. Earlier in the week I couldn't open the lock on the skip/dumpster. FIL tried too. Apparently because it was so cold it froze! Husband was able to open it easily today as it has been a little warmer. He said water came out of when he tipped it slightly to put the key in. I'm not sure how the water got it in. The lock has a little latch over the hole, but apparently it happened somehow. Husband threw all the bags of rubbish away and took care of a large box full of recycle stuff that I couldn't lift. So tomorrow when we go back to Jane's we start with no rubbish around. Someone is coming tomorrow to look at some more of the genealogy so hopefully some of it will be gone!

A wave photo from today. This lighthouse is South Haven. 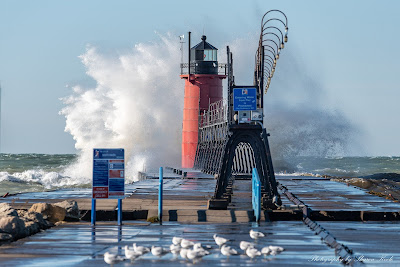 While we were there two...people (being polite) went right down to the end of the pier with two dogs! The You can see how big the waves were and they were rolling over the pier at points! As I was getting ready to take this photo another couple stepped out onto the pier just as a waver came crashing over the other side! They managed to escape the water and wisely decided not to go on the pier.