It was a windy day here in Michigan. The temperature plummeted from 59F (15C) to 39F (4C) in about an hour! What a drop! We had really high winds too. MIL lost power for a few hours but luckily we didn't. A few things were blown around the garden, but we didn't lose any trees (thank goodness). We have a few really tall trees at the bottom of our garden. They have survived wind storms so far but you never know! As I sit here now it sounds as though the winds have settled down a little.

I didn't get a lot done today. We were gone for a lot of the day. We took a trip to the lakeshore and stopped to drop off some things that middle son had bought and had shipped to our house. I think I've said this before but having packages delivered to his apartment usually includes having to either drive to the post office or waiting until the office (located in another apartment complex owned by the same company) is open so he can go get it. That usually doesn't work out too well due to his work/sleep situation.

Husband wanted to get his booster vaccination today so on the way back we stopped to do that and I picked up some shopping while waiting. I later learned that daughter and her husband got theirs done today. My oldest son had his on Thursday so at this point we have all had it. After the shopping/vaccination we stopped at the post office (I was surprised it was still open as it was later on Saturday!) and then we stopped and picked up some bird seed we had ordered online.

The lakeshore was really windy! Husband got out for about two minutes and then decided he was going back in the car. I braved the winds - stayed at a distance - and got some photos. It is really striking to see the waves and to realise that this is a lake - it's not an ocean or sea with regular tides and waves. I had to brace myself to stay on my feet! 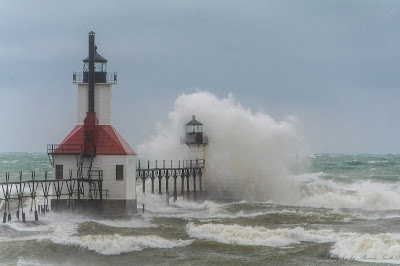 This is St Joe Lighthouse close to where my middle son lives. No walking out to the lighthouse today lol.